The carsales ARG eSport Cup field is set for a thrilling finale tonight, with a 39-car field set to take to the famous Mount Panorama circuit.

Haber will be partnered by sim expert Fawzan El-Nabi, and with a 37 point series lead over Jaden Ransley, Haber is in the box seat to secure the title

To secure the ARG Cup crown, Haber needs to finish ninth or better to guarantee himself the title.

Panta Fuel-backed guest driver Ash Sutton remains a chance to win the title, sitting 55 points behind Haber. Like Ransley, Sutton and his sim regular co-driver Jake Blackhall will need a poor finish from Haber to challenge for the title.

Speed won’t be a problem for Sutton, though. The 2017 British Touring Car Champion took victory in the sprint round at Bathurst in Round 1 of the ARG Cup back in early April, so look for the Brit to throw caution to the wind.

TCR Australia drivers Dylan O’Keeffe and Jordan Cox remain the only other drivers with a mathematical chance to claim the title.

While there will be interest in the race for the cup, the 78-driver field is full of a star power, including champions from Supercars and the sim racing world.

McLaughlin’s DJR Team Penske team-mate Fabian Couthard has been recruited by his endurance co-driver and TCR Australia regular Tony D’Alberto. The pair will race with backing from KMG Wheels, see pic above.

Shane van Gisbergen will also drive with his Supercars endurance partner, teaming up with Garth Tander in the JAMEC Racing Audi.

Walkinshaw United’s Chaz Mostert will link with his Bathurst 6 Hour winning team-mate Nathan Morcom in one of the HMO Customer Racing cars, while the other HMO entry of Will Brown will feature Erebus Academy young gun Jobe Stewart.

Qualifying and the live broadcast starts at 7pm AEST, with the race to start at 7:25pm AEST. See below for the live feed.

See below for the top 10 driver standings leading into the final event.

See below for the full grid of 39 cars for the Bathurst endurance race tonight. 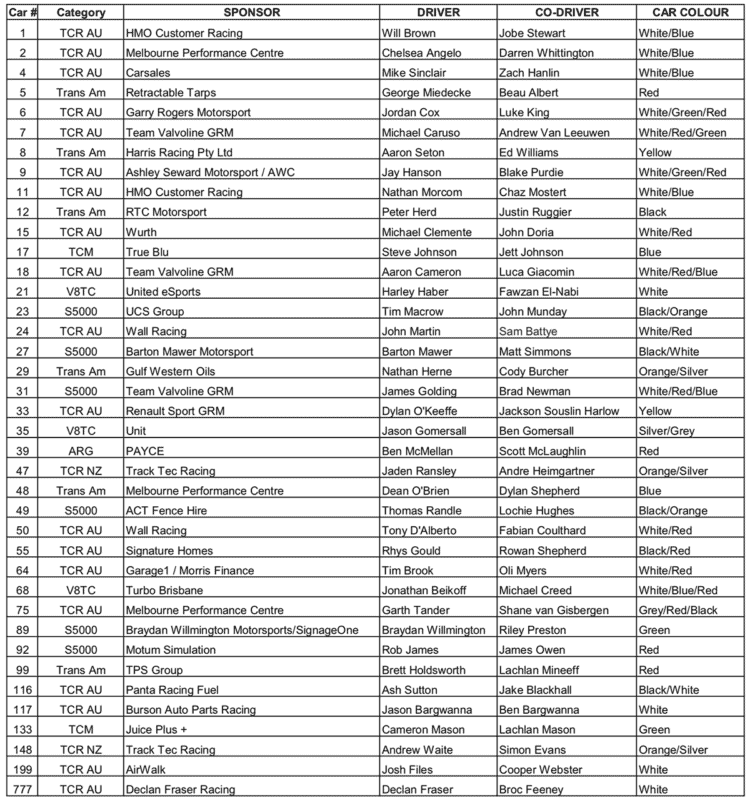