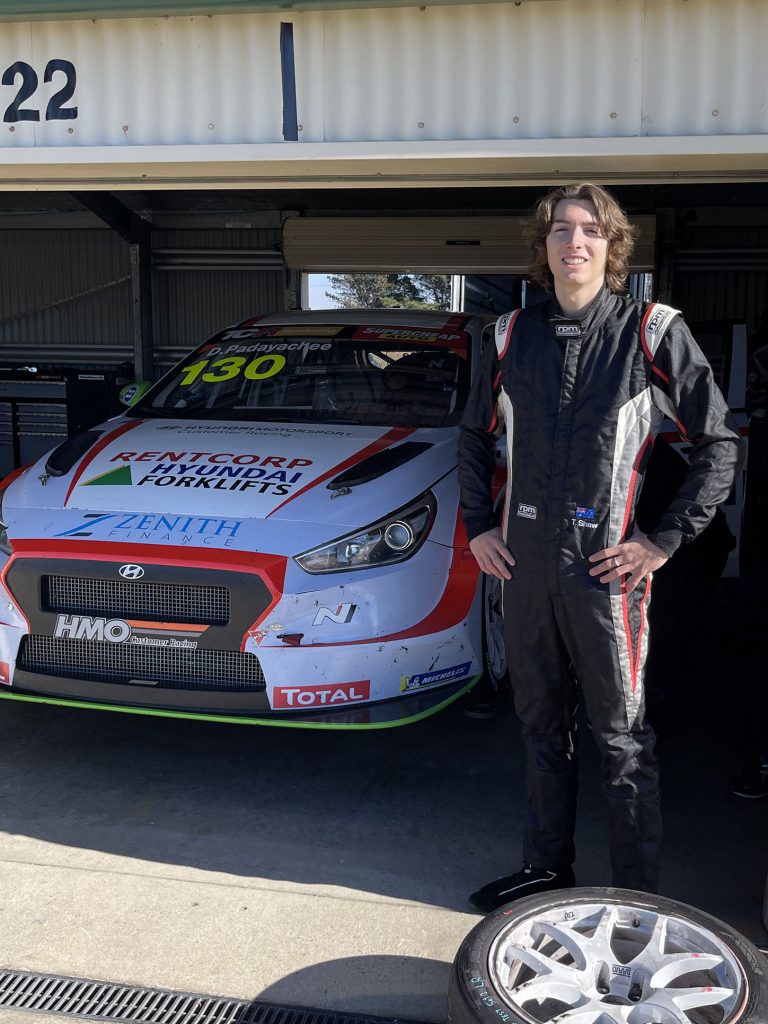 Tom Shaw has enjoyed his first laps in a Hyundai i30 N TCR car as he looks closely at competing in the turbo-charged class, possibly as early as this year.

Shaw currently competes in the Mazda RX8 Cup Series and is keen to make the step up into the Supercheap Auto TCR Australia Series.

“We’re definitely looking at it and trying to make it work for Morgan Park,” said Shaw.

“The HMO team were happy with the test, so there’s a possibility at the moment. There’s nothing firm yet, so we’re working hard before Morgan Park to see if we can pull it off.

“I love the team, the car and the series. It’s always been a dream to drive in TCR. It’s definitely something I am looking towards.

“The category is great, especially with media, fans and the whole ethos of the series – TCR is on the right path.”

Shaw has driven and raced a number of different cars in his formative years, but says that nothing was quite like the power and speed of the under 2 litre touring cars.

“Going to the test, I was pretty much hoping into the deep end,” he said.

“Going from an RX8, which is really a production-based car, H-pattern gearbox, to a race car with a genuine race tyre, much more power, left hand drive – it was interesting to adjust and adapt to that.

“By the second session, I was starting to get some time and the team was happy. From where I started from at the start of the day, it was all heading in the right direction.

“Nathan (Morcom) and the guys at HMO did a great job for me. They let me look at data, plus lots of feedback, so that was really helpful. All of the crew, the engineers were really helpful. They took the time to focus on me, and I had all of them around me, trying to help me improve. It was the perfect day.”

Tom currently sits fourth in the Mazda RX8 Cup Series and raced at Morgan Park on the weekend, finishing with a number of top five results. The category is managed by his father Ric, himself a long-time racer.

Ric has competed at all levels of motorsport, both locally and on the international stage. He has made eight starts in the Bathurst 1000 between 1994 and 2001, including many starts in the Super2 Series, production cars and more.

Tom says that Ric is now putting his racing focus into his son.

“He really wanted to do motorsport at the top level,” Tom said.

“He has had a successful career, but he said to me that he didn’t get much help, and he is now putting me first. I really appreciate that.

“He wasn’t able to carry on, and he would have absolutely loved a chance at a category like TCR, so I’m just aiming to get the most out of my career and use his experience to help me along the way.”

The next round of the Supercheap Auto TCR Australia Series will be held at Morgan Park Raceway in Queensland on the rescheduled date of August 13-15. CLICK HERE for tickets.